Edward Turner, the designer of Triumph’s Bonneville T120 and arguably the most famous name in motorcycles, created the iconic British classic in 1958. The T120 inspired a new generation of teenage cafe racers and established a proud reputation for action and performance. It has remained a beacon of British motorcycle engineering, finding a resurgence in 2006 after the launch of its successor the Bonneville T100.

In part, the Bonneville T120 gave rise to the Bonneville T100, which launched in 2002 and quickly earned acclaim as a modern vintage ride with stylish appeal and all-performance handling. The T100 played a pivotal role in the birth of the modern custom scene, bringing the classic Bonneville into the modern era and instigating the rebirth of the T120 four years later.

Though the Triumph Bonneville T100 is only 13 years old, its reputation is bound to the vintage classics of the 1950s and 1960s. It is a young piece of machinery from a brand with a rich history, and is styled as such. The T100 is bound to both the past and present, tying modern motorcyclists to the heyday of 1950s engineering and vice-versa. At the time of its creation, the T100 was already acclaimed alongside the classics, which has emboldened motorcyclists to follow in the tracks of the earliest roadwarriors. For these reasons, we chose the Bonneville T100 to be the centerpiece of this Euro Bike photography concept.

In a word, Triumph Motorcycles represent freedom. It is a means to venture beyond limitations; to bypass roadways and barriers and claim the liberty of the open road and unbeaten path in the most exciting way we can think of. The Triumph lifestyle is only made possible through its products. Therefore, we paired lifestyle alongside the product to show they are dependent on one another. Our media is intentionally commercial, casual and candid. Nothing is random, but it feels so. Sudden pitstops along the side of the road, obvious product shots, inviting lifestyle shots… they all share in telling the narrative.

To emphasize the quality, style, and classic vibe of the Bonneville T100 we styled the talent with quality, vintage-style clothing. We chose to play up Triumph’s identity as a luxury and masculine brand by outfitting the model with a Bilt Drago Leather Jacket, Street & Steel Fingerless Gloves, Ray-Ban Clubmaster, and Bell Bullitt Helmet. These accessories played to the strengths of the narrative: a solo road trip through Angeles National Forest with nothing but the atmosphere and the steady rumbling of the Bonneville T100.

We chose to work in Angeles National Forest because of its dynamic landscape and unique micro-climates. The setting and terrain change regularly, which helped diversify the imagery and create a longer, more adventurous feeling road trip. The changing land also helps the consumer see and understand that this is more than a motorcycle advertisement–that it is a lifestyle awakening.

In a few of the photographs, we showcased the application of the product beyond style and into the utility (another area where landscape really came into play). Pairing the products with the setting added a lot of variation to the photoshoot, which helps tell a deeper story. In some photographs, the narrative becomes more about the individual riding the Bonneville T100–his curiosity, demeanor, and passion for adventure. While other photographs (the majority), show why and how the T100 is a centerpiece to his life; how it activates his personality. When viewed as a whole, the gallery shines with a very defined purpose and emotion that would have otherwise been dulled without the character and scenario we invented.

We’d like to give a shout-out to Eaglerider in Los Angeles, where we rented the Triumph Bonneville T100. It was the exact bike we needed for the occasion. The Triumph was a comfortable ride through the city and up the highway to Angeles National Forest. It was a perfect combination between a street bike and destination bike, climbing up the mountains and across unique terrain effortlessly. We love the fact that the T100 is a lighter, sit-up bike with 100cc and a smooth clutch. It was a super comfortable ride. The coolant system, which prevents overheating, was another awesome feature for a long day riding in the mountains. If you plan to visit California and want to enjoy a day riding through the mountains like this, check out Eaglerider in Inglewood. You can also contact us for more information on our exact route.

Our photographer, Justin Mein, road his Ducati Monster 1200 S during the shoot. He and a good friend Curtis Blank captured this really awesome behind the scenes photography.

A little bit about our gear…

Our gear made the transition between micro-climates and scenarios seamless. We packed two Peak Design 45L Travel Backpacks. These camera bags held all of our gear, water, and food. For a lightweight, versatile bag, the Peak Design Travel Backpack was super spacious, so we didn’t need to take more than one bag on each motorcycle. Without them, we wouldn’t have been able to bike through the mountains for 6+ hours comfortably.

We shot the entire gallery on the Nikon D5, rotating between the Nikon 24mm 1.4 and Sigma Art 50mm 1.4. We primarily used the Nikon 24mm lens. In some scenarios, we used two Profoto A1 Wireless Systems with air remote trigger to set the scene.

During the photoshoot we road through a magnitude 5 earthquake! We felt the rumbling but didn’t know how serious it was until we checked our phones and saw the notification. Throughout the rest of the day, we had to be on high alert for debris in the roadway and had to be conscious of unsecured rockfaces when venturing around bends and offroad. Fortunately, we had really awesome gear, expertly crafted motorcycles and some of the best motorcycle helmets on the market. Safety first! 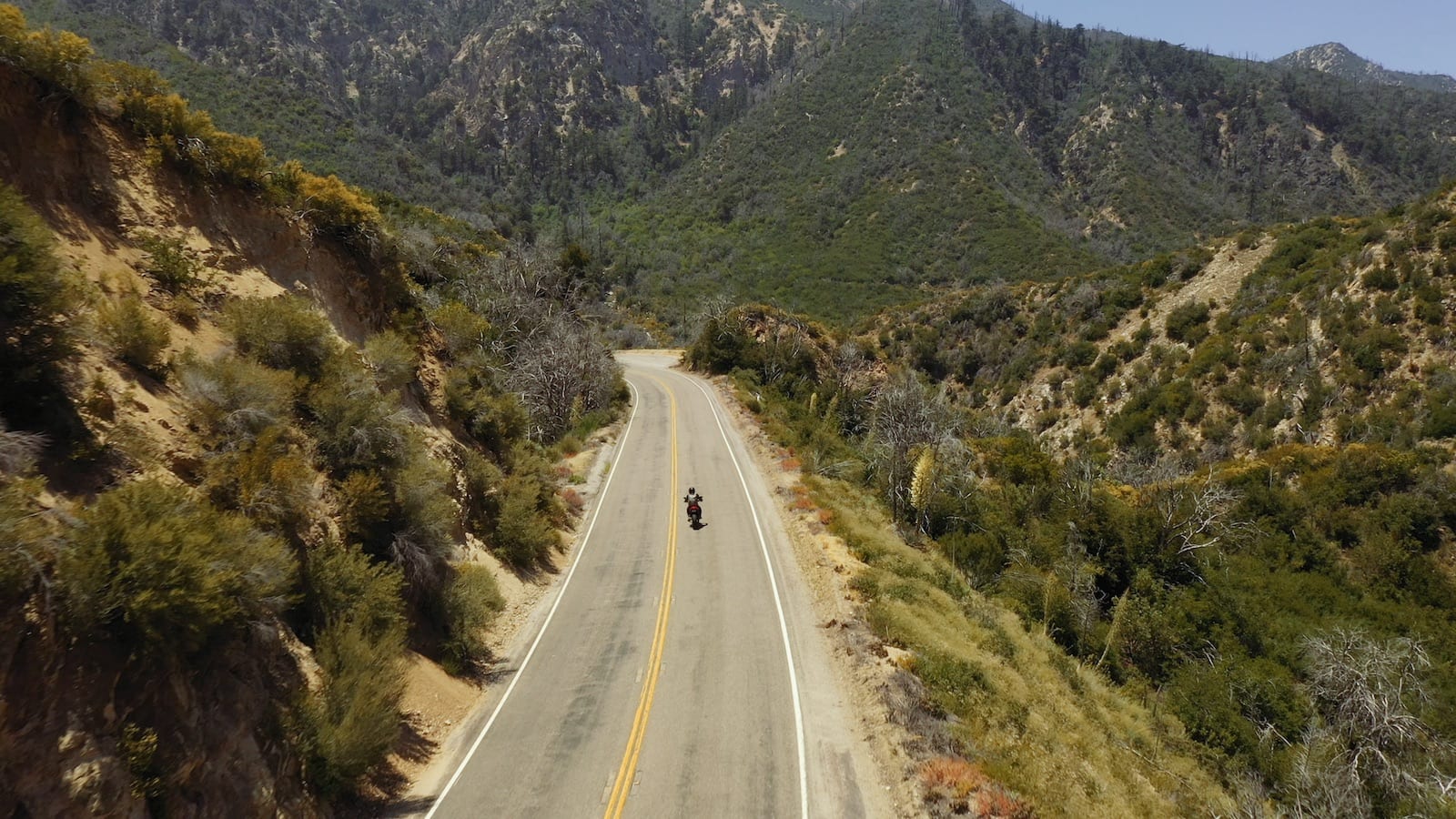